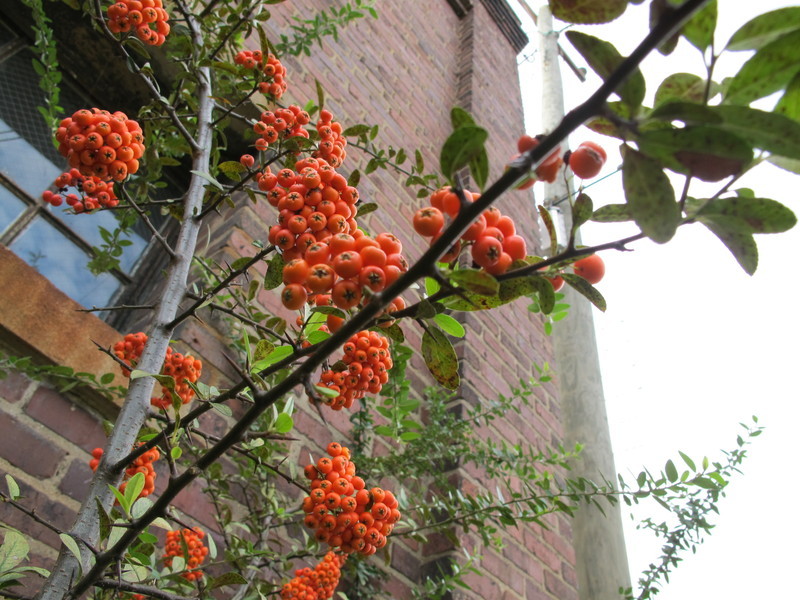 Hello there plant enthusiasts! Happy Fall!!!â€¦Another shift of the seasons is upon us.

The blooming is really slowing down now. Almost everything flowering is in the Asteraceae family. Notable plants are Goldenrod (Solidago spp.), Aster (Aster spp. Eurybia spp. and  Symphyotrichum spp.) and Ironweed (Vernonia spp.). The other day i noticed that Abelia Ã—grandiflora in the Caprifoliaceae is still blooming to the delight of pollinators.

Many grasses are putting on a show. The Miscanthus (Miscanthus sinensis) is in full effect. If you ever plant this terribly invasive being please buy a sterile cultivar! One of my favorites is the Pampas grass (Cortaderia selloana) from Southern South America hardy to zone 5 (Hogan, 2003).

The True Nature Country Faire http://www.organicgrowersschool.org/content/1515 was a lot of fun. i led two plant walks and helped with a benefit dinner. Unfortunately very few people showed up due to inclement weather on Sunday.

At the united Plant Savers Sanctuary http://unitedplantsavers.org/ we saw a number of special plants. First i went on a Prairie walk with Hank Huggins who has helped steward the land for almost 20 years! He showed us a number of flowering plants including Maxmillian Sunflower (Helianthus maximiliani) Slender Mountain Mint, Aster, and Ironweed. We got to see some nice grasses in particular as well Purple Top (Tridens flavus), Big Blue Stem (Andropogon gerardii ) and Indian Grass (Sorghastrum nutans).

A fascinating class on Native Pollinators with Jim Wachter and the end of Robert Eidusâ€™s class on Ginseng farming rounded out the educational offerings.

i picked up an interesting plant at the conference that was sold as Aztec Dream Herb (Calea zacatechichi). This plant hearkens from Central America and Mexico, used medicinally for cholera, colic, in appetence and has a fascinating ethnobotany aligning with the common name (Johnson, 1999). Another interesting plant was the Ololuiqui (Turbina corymbosa syn Rivea corymbosa) in the Convolvulaceae which is apparently one of the magic plants of the Mexican indiginous.

In the meantime I have also done plant walks at Joyce Kilmer for the Appalachian School of holistic Herbalism and at Warren Wilson College as well.

The Lake Eden Arts Festival (LEAF)  http://www.theleaf.com/ is this weekend. Most tickets are sold out by now. However, if you are coming i will lead a plant walk focusing on trees and the Frank Cook legacy at 10:15 a.m. Saturday.

My winter CSA food preserving job at Blue Ridge Food Ventures has ended for the season. There is still time to sign up for the winter CSA for those around Asheville http://www.wintersunfarmsnc.com.

The Butternut (Cucurbita moschata) Wine/Mead and Tomato (Solanum lycopersicum) wine/mead are tasting pretty good. The next step is to flavor and bottle them. This weekend marks the end of mead starting for the season. After uncovering some preserved materials i am hoping for small batch brews  of Yaupon Holly (Ilex vomitoria) Mead/Wine and a Pennsylvania Rainbow Mead with Bee Balm (Monarda didyma), Wintergreen (Gaultheria procumbens) and a touch of Goldthread (Coptis trifolia).

Now i will dive into the families covered by last timeâ€™s suggested reading. Some sections are covered in brief but i would be happy to expound to anyone looking for more specific information.

i have taken to including the current orders that families are ascribed to as defined by the Angiosperm Phylogeny Group 2 (APG2) and presented in three sources (Heywood, Brummitt, Culham, & Seberg, 2007; Judd, Campbell, Kellog, Stevens, & Donahue, 2008; Spears, 2006). This relationship is sometimes at odds with how Elpelâ€™s text goes. In theory every family he features would be lined up within their respective orders in an evolutionary progression. Some families are changing orders due to genetic analysis. Some physical characteristics that had previously aligned families have been shown to have evolved in parallel and not be evidence of direct relationship.

However, i can already start to see patterns in floral characteristics, phytochemistry and even utility for fiber and certain food stuffs along modern order level classification lines.

Flax (Linum usitatissimum) is famous for fiber, omega fats and industrial uses. I have little to add to Elpel except that the Flax order that he refers to does not exist under APG2.

The new order designation confirms the similarity of floral parts to the Bean family (Fabaceae). The plants in this family have very pretty flowers though sometimes diminutive. Whereas the family above moved into the Malpighia Order this family moved out and into the Bean order Fabales

Devilâ€™s Walking Stick (Aralia spinosa) fruits are putting on quite a show right now.  (Aralia nudicaulis) was apparently one of the Sarsparilla plants. Young shoots and leaves of the afore mentioned as well as California Spikenard (Aralia californica), Spikenard (Aralia racemosa) and Aralia spinosa are edible and have been used by traditional societies wherever they occur (Couplan, 1998; Facciola, 1998).

The young  leaves of a number of species are eaten and used for tea in Asia including (Acanthopanax divaricatus, Eleutherococcus senticosus, Acanthopanax sessiliflorus, Eleutherococcus pentaphyllus), Udo (Aralia cordata), Japanese Angelica tree (Aralia elata) and Ming Aralia (Polyscias fruticosa) (Facciola, 1998). The roots as well as young shoots of Devilâ€™s Club (Oplopanax horridus) have been used by the Inuit in Alaska but the prickles can cause very painful easily infected wounds (Couplan, 1998).

Ginseng is one of the most famous medicinal plants in the world. Trade to China from Appalachia was booming already in the early years of colonization. Now most wild ginseng has been harvested and wild simulated and even intensively cultivated practices have rushed to fill the gap. The literature on Ginseng is of course profuse and some choice sources for information can be found in the medicinal resources section of the site.

Triterpine saponins occur in the Araliaceae including English Ivy (Hedera helix) (Wink & Van Wyk, 2008). English Ivy may also cause contact dermatitis (Nelson, Shih, & Balick, 2007). However, it can aid in the detoxification of indoor air (Judd et al., 2008). Handling the root bark of Aralia spinosa has caused severe dermatitis in some cases (Couplan, 1998).

English Ivy is a dye plant (J. Cannon & M. Cannon, 2003, 2003). Vines of ivy can be used for various decorations. English Ivy is famous for covering buildings but can cause some damage to the outside surface. Many Aralia spp. are beautiful plants with showy blossoms.

Many medicines come from the celery family. In his copy of Botany in a day Frank Cook (2006)noted a medicinal use which he learned from 7Song of Osha for clearing the mind like Calamus. He also noted the use of Parsley seed tea for alcoholism. Frank is cited twice in the text for information on the poisonous nature of some Sanicles (Sanicula spp.) and the weedy presence of Japanese Parsnip (Torilis japonica) in California (Elpel, 2004, pp. 132,134).

Many of the Appalachian introduced and naturalized species are invasive. These include Wild Parsnip (Pastinaca sativa), Spreading Hedgeparsley (Torilis arvensis), and Fennel (Foeniculum vulgare) (J. H. Miller, Chambliss, & Bargeron Charles, 2006). Gout weed (Aegopodium podagraria) can also spread aggressively however it is imminently edible used like parsley and also is known to indicate nitrogen rich soils in Europe where it is from (S. R. Kaufman & W. Kaufman, 2007). Giant Hogweed is an introduced problem plant of the North from Maine to British Columbia (S. R. Kaufman & W. Kaufman, 2007). Poison Hemlock forms dense stands that are toxic to most animals where one plant can make 30,000 seeds (S. R. Kaufman & W. Kaufman, 2007). Bur Chervil (Anthriscus caucalis) is a European plant that is considered a weed in the western U.S. (Ball et al., 2001).

The bitter root of Green Gentian (Frasera speciosa) was mixed with greens and eaten by Western Native Americans <!--></