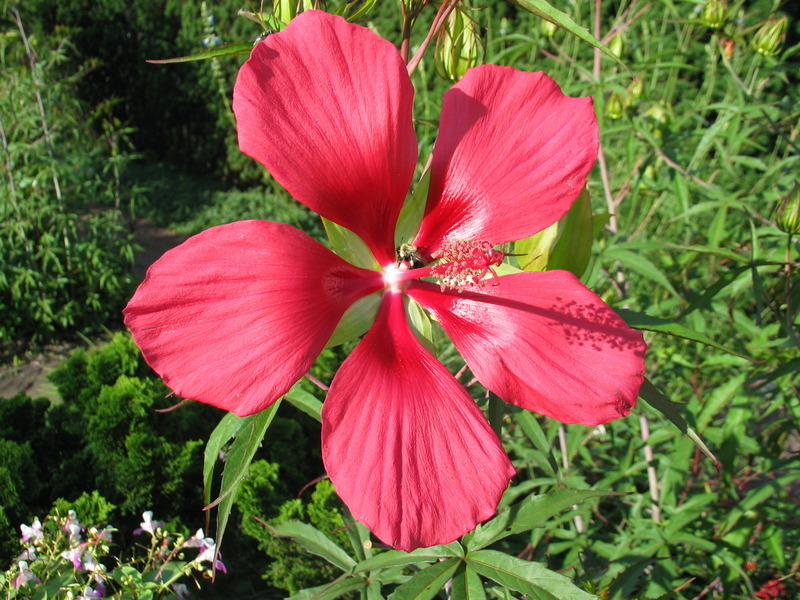 Wow is spring ever springing in southern Appalachia…i have been busy as a bee teaching classes, doing botanical surveying of various properties, working for Plants and Healers International and hiking with my sweetie. Still on the search for Morel Mushrooms (Morchella spp.) the most choice  fungi of Spring.

The exception rather than the rule is for monocots to be edible. Members of the Onion genus Allium formerly put in their own family the Alliaceae and Day Lily (Hemerocallis fulva) from the Hemerocallidaceae are a few edible members. However, many members from the monocots are deadly poisonous. Even the Day lily mentioned above that has been consumed for thousands of years in Asia can cause intestinal upset in a small percentage of people. The devil is in the details! Ramps (Allium tricoccum) which are popular in Appalachia this time of year look very similar to the deadly Lily of the Valley (Convallaria majalis). They are also in threat of overharvest and probably need to be more intentionally cultivated than wildcrafted as well (Bentrup, Chamberlain, & Kellerman, 2011; Chamberlain, Bush, Hammett, & Araman, 2002; L & Chamberlain, 2009).

The Grass family (Poaceae) is also in the monocot group and one of the most important food families in the world! Which members of the grass family do you regularly consume? What other Monocot foods can you think of off-hand or by researching? There are certainly some other important ones out there though the poisonous nature of many members begs one to not assume and go slow…

On page 15 in the 5th ed. Elpel explores the idea of floral evolution. This happens on page 17 in the 6th ed. The basic idea is that plants started with many separate parts in their flowers i.e. Magnolias (Magnoliaceae) and Buttercups (Ranunculaceae). Plants have evolved over time to a fusion and modification of parts that can be seen in young families like the Orchids (Orchidaceae) and Asters (Asteraceae). Interesting that these are two of the youngest families in the world and yet they are also the bigges. Each has close to 10% of the total number of global flowering plant species! Why do you think this is? Seems intuitive that the oldest families would have the most members eh?

The last two versions of Botany in a Day diverge quite a bit in treating seven to eight major families that together hold about one in six of all flowering plants. The older version has a more in depth treatment which is nonetheless mostly repeated in the family descriptions later in the text. The new version goes off of a deck of cards that Thomas designed which can be very helpful in remembering family patterns. Thomas also substitutes the  Grass family and Rose family in the 6th ed for the Mallow family featured in the 5th ed.

Several families including most of the ones covered here can still be referred to properly by their old names which just end in ae and often are linked to flower form (Heywood, Brummitt, Culham, & Seberg, 2007).  See both family names next to each other in the following break down.

The Brassica family (Brassicaceae/Cruciferae) are very prolific and represent one of the most choice and nutritious families for greens in the temperate world. They are relatively easy to know due to distinctive four petaled flowers, different sized stamens distinctive tastes and smells.

The Mint family (Lamiaceae/Labiatae) are probably one of the easiest families to get to know and also one of the most useful to people and insects. However, i would add the Coffee family (Rubiaceae) and Nettle family (Urticaceae) to the list of families that have square stems as well as other families in the Mint order (Lamiales). These order mates of Mint include the Verbena family (Verbenaceae) and the Mullein family (Scrophulariaceae).

The Pea family (Fabaceae/Leguminosae) tends to have very distinctive flowers as described and illustrated by Elpel. i would point out that in the Southern hemisphere where most members grow they sometimes segregate the family into three including the Fabaceae, Mimosaceae, and Caesalpiniaceae. Also this family has grown and is now considered to have over 700 genera and 19,000 species (Heywood et al., 2007; Spears, 2006). Over 30 tribes are now recognized and more than 20% of species in the family fall within the two genera Astragalus and Acacia alone! Also not all Pea family members have the typical banner, wings and keel as demonstrated by the Mimosa and Albizzia genera amongst many others.

Elpel takes on the Lily family (Liliaceae) next. He alludes to how much the family has changed. This is a family with some foods but also some deadly poisonous members. Look under the plant families tab of the Botany Every Day website for an updated treatment of how this family is now characterized and ethnobotanical uses. The 6th edition of Botany in a Day also does a good job of describing the dissection of this formerly lumped together grouping.

The Rose Family (Rosaceae) is the number one family for temperate fruit and rather easy to identify in tree and shrubby forms. Smaller plants in the family can sometimes be confused with members of the toxic buttercup family. This is a good family to learn about the phenomenon of stipules (leaf like appendages occurring where the leaf petiole meets the main stem)

The Grass family (Poaceae) as stated above is a major food family. Probably almost all the members could be used for their grain in a pinch. Gluten is a protein fraction only within some members native to Africa, the Middle East and Mediterranean.

These are the keys that Elpel uses to put plants into their respective families. It might be easy to be overwhelmed by the density of information on these pages. Slowly slowly….Just glance over it periodically over the next couple of weeks rather than try to absorb it all right away. See if you can get some major patterns to stick.

-     Read the descriptions both in the reference section of Botany in a Day and under the Plant Families tab at this website for the 7/8 plant families covered in the primer.

-     Go around and try to find as many monocots as you can.

-     Make a meal including some wild foods and tell me/us what you decided to put in it. Only pick things that you can absolutely positively identify and know for certain not to be rare! Safety and conservation first! You can see a spirited discussion i and others had about this with a colleague on Facebook at the following link.

-     Please let me know your thoughts in general and anyway i can help this class serve you best.