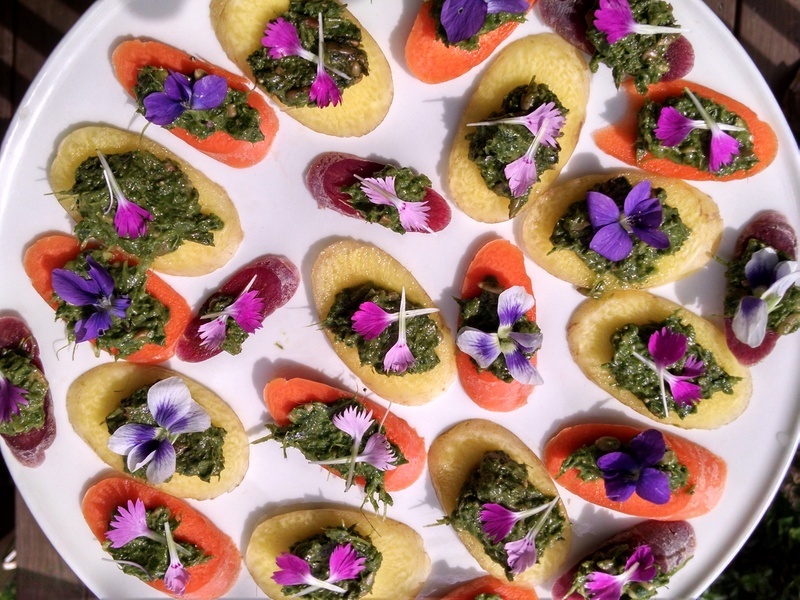 How about you? How many of these plants above do you recognize? How many do you know the family of? Take some time to look one up in Botany in a Day and learn something new this way!

See this photo album entitled Spring Springing for a sampling of what’s typically on offer this time of year in the area around Asheville, NC and further afield within the state and other parts  of southern Appalachia.

Brassicaceae members Garlic Mustard and Honesty from the list above are invasive and edible. Native favorite foods Ramps (Allium tricoccum) are up and Morels (Morchella spp.) are out. Ramps in particular often lead me to think about ethical foraging. i came across a great article that addresses this concern. It is important to realize both Ramps and Morels have potentially poisonous lookalikes.

The greens abound currently! Other great foods from the Brassicaceae are available including Alliaria petiolata, Armoracia, Barbarea spp, Brassica spp. Cardamine spp., and Lepidium spp. Chickweeds (Stellaria spp. and Cerastium spp.) are still around but on their way out. Violets (Viola spp.) are in full effect and i continue to eat Wild Onions (Allium vineale) weekly! A favorite cooked green of the Cherokee, Sochane (Rudbeckia laciniata) is out and about. Hostas are also emerging which are considered edible according to a number of sources.  They are eaten traditionally regarding some wild species in Japan (Calavan, 1972; Carter, 2012; Fern, 2008; Hollis, 2011; Hosking & Samuels, 2015; Kelley, 2014). What’s your take, knowledge, experience with eating Hostas? Important to realize that when emerging they greatly resemble the potentially deadly but mostly found in the wild False Hellebore (Veratrum spp.) which people have confused with Ramps before as well.

The evolution of plants covered in the next few pages can verge from fascinating to overwhelming. Can anybody really conceive of what 300 million years looks like? Yet we are burning in 300 years petrochemical products that were generated all those hundreds of millions of years ago by the deposition of ancient huge Horsetails (Equisetum spp.), Ferns, and Wolfpaws (Lycopodium spp.). 300 million and 300 share the same denomination yet the order of magnitude difference is almost beyond human comprehension. Interesting the decline in fossil fuel use recently due to the COVID-19 pandemic. Should make for some fascinating scientific observation of what the world could look like if we were to take such a reduction intentionally into our plans moving forward… People are seeing blue skies and far off mountain ranges for the first time in decades especially in Asia and of course are having the resulting health benefits because of such a reduction in pollution.

One potentially important lesson is that some plant groups have significantly more history, tenacity and adaptive ability on this earth than others. We are in the midst of the 6th great extinction that has been witnessed by the earth. Some people term it the Anthropocene because of the vast influences of humans on the earth’s biochemical systems (Bubandt et al., 2017; Kawa, 2016). Elizabeth Kolbert (2014) has written a riveting book regarding this concept. The vast majority of every species that has ever lived had already perished before humans were a sparkle in the eye of creation. The last great extinction happened 65 million years ago when a big meteor hit the Yucatan peninsula. We have a lot to learn from some of the ancient beings that have survived so much.

After the botany overview in the text most people tend to skip over the single celled plants, lichens, ancient non-vascular spore plants (Mosses, Hornworts and Liverworts) and vascular spore plants (Horsetails, Club Moss, Ferns). That said i have steadily grown my own interest is such subtle beings and will include some resources here for folks that would like to explore more. One note on Algae is that they produce as much oxygen for us as forests like the Amazon that we can more readily see.

Only a few ferns in general are safe for consumption and traditionally eaten and even some of those are in question. Ostrich ferns (Matteuccia struthiopteris) which only naturally grow in the Northeast, Midwest and Canada/Alaska, seems to be the most prime. Bracken fern mentioned above has been eaten all over the world but has been known for decades to potentially cause cancer (Fenwick, 1989; Pamukcu et al., 1980; B. L. Smith et al., 1994). This effect may even extend to the consumption of milk from cows that have grazed on Brackens. However, there is some question if part of this effect is immunosuppression versus the pure carcinogenic nature or various compounds (Latorre et al., 2009). Ferns also have an enzyme called thiaminase that breaks down vitamin B12 and therefore should always be cooked in order to deactivate this anti-nutrient.

According to a conversation i had with Frank Cook, he took note of much fern eating by people in New Zealand in particular. Fern eating is popular in Japan as well. i have found a little information on the ethnobotany of ferns in New Zealand, the Andes and Japan (Abbe, 1985; Lellinger, 2002; May, 1978; Rogers, 2014; Shawcross, 1967; Tryon, 1959).

Conifers represent a very accessible group to approach. Only around 630 total species have been described in the whole world (Groombridge & Jenkins, 2002, p. 236). However, breeders have developed many varieties with dramatic results in increased diversity. Most places in the temperate world have less than ten species of native conifers. Landscape varieties are often easy to identify to genus, though to species can be difficult. A number of great references exist to help with teasing apart the many conifer types (Eckenwalder, 2009; Farjon, 2008, 2010). Conifers are much older than flowering plants. Their range has also been much diminished from a former wider distribution. They tend to live in harsher conditions than the flowering trees as well. Only a few families represent the majority of conifer diversity including the Cupressaceae, Pinaceae, Podocarpaceae, Taxaceae, and interestingly the monotypic Gingkoaceae. The first two have the lion’s share of the species. A few other more southern and Asian families also fall in the conifer group including the Araucariaceae, Cephalotaxaceae, Cycadaceae, Ephedraceae, Sciadopityaceae, and the Zamiaceae.

The flowering plants are relatively young compared to the other plant groups. Yet as can be seen on page 13/14 of Botany in a Day they contain the vast majority of species now growing on the planet (Elpel, 2004/2013). Therefore, they will be the main focus of our studies this year. We will revisit the conifers more in depth during the class about woody plants as well.

Elpel points out a couple other very useful resources for this exploration of the plant world Wildflowers of North America by Frank Venning (1984) and Plant Identification Terminology by James G. Harris (2001). Consider purchasing these books as well if you are able. Learning terminology is an incremental process. Flash cards help some. A number of good online resources exist with card sets already made and the ability to generate others. Quizlet is a favorite i have explored so far and mentioned last class as well http://quizlet.com/subject/botany/.  Ultimately, some form of repetition will be necessary to cement certain words into your vocabulary. One bonus is that by learning many of these words you may better understand the roots of romance languages. You can thereby learn Spanish, Italian, French and Portuguese easier and may do better on the graduate school entrancde excamine known as the GRE as well if that is of interest. See the resources section for a list of other electronic resources that may be available for further study. Here is a PDF focused on teaching botany to children in particular as i know that many folks are experiencing a lot of extra time with their littles all of a sudden due to the current pandemic. i also have developed a PDF of some favorite Audio/Visual resources for the study of botany as well.

For the next class we will cover the pages 14-24(5th ed) 15-22(6th ed.) which describe the two major classes of flowering plants and patterns of seven major plant families of the world. It will be posted on 5/2

Below are items to think about/comment on. Please leave information in the commentary under this class or alternatively write me directly at marc at botanyeveryday.com.

Check out one of the websites i mentioned in the introduction to this class and pick up an interesting fact or two. Share them with us!

Most people in the world get the vast majority of their food from around 30 plants. An indigenous culture may easily make use of over 150 species of plants for food throughout the year. How many different plants do you consume annually? What are some of your favorites? What family do you consume the most from?

Praises to all that have donated to the cause. i encourage everyone to donate as they are able. Your contributions greatly help me continue this crucial work of ethnobotanical research and education. Even more important this year given the devastation of my in person teaching schedule due to the current pandemic.

Abbe, E. M. (1985). The Fern Herbal: Including the Ferns, the Horsetails, and the Club Mosses. Cornell Univ Press.

Casselman, K. D. (2001). Lichen Dyes and Dyeing a Critical Bibliography of the European and North American Literature in a Culturally Marginalized Field. Library and Archives Canada.

Lellinger, D. B. (1989a). The Ferns and Fern-Allies of Costa Rica, Panama, and the Chocó: Psilotaceae through Dicksoniaceae. American Fern Society.

Lellinger, D. B. (1989b). The Ferns and Fern-Allies of Costa Rica, Panama, and the Choco: Psilotaceae through Dicksoniaceae. American Fern Society.

Lindsay, W. L. (1855). Experiments on the dyeing properties of lichens. Printed by Neill and Co.

Long, R. W., & Lakela, O. (1971). A Flora of Tropical Florida: A Manual of the Seed Plants and Ferns of Southern Peninsular Florida. University of Miami Press.

Nelson, G. (2000). The ferns of Florida: A reference and field guide. Pineapple Press.

Niklas, K. J. (2016). Plant Evolution: An Introduction to the History of Life. University Of Chicago Press.

Small, J. K. (1931). Ferns of Florida; being descriptions of and notes on the fern-plants growing naturally in Florida. Science Press.

Walewski, J. (2016). Ferns & Allies of the North Woods: A Handy Field Reference to All 86 of Our Ferns and Allies. Kollath-Stensaas Publishing.